Menu
Uncategorized What is RAID 50 : The two in one RAID
Hit enter to search or ESC to close
X

This article will give you detailed information about what is RAID 50, discussing its individual, combined features and its components.
(888) 328-2887
Start Data Recovery

The definition of RAID array remains as a means for reliable protection and storage of data across multiple storage devices. To this end, the varying types of RAID level such as RAID 5, RAID 1, and RAID 2 have been identified and used to improve data storage. One of these types of RAID levels will be discussed in this article.

This article will give you detailed information about the components of RAID 50, discussing its individual and combined features. You will also learn the configuration of the RAID level and its inherent merits and demerits.

What is RAID 50? It is a RAID level that combines two different RAID levels, RAID 5 and RAID 0. RAID 50 combines the features and advantages of these two RAID level to give users an enhanced performance with their storage devices. RAID 50 is a type of nested RAID level, which means it is a combination of two different arrays. 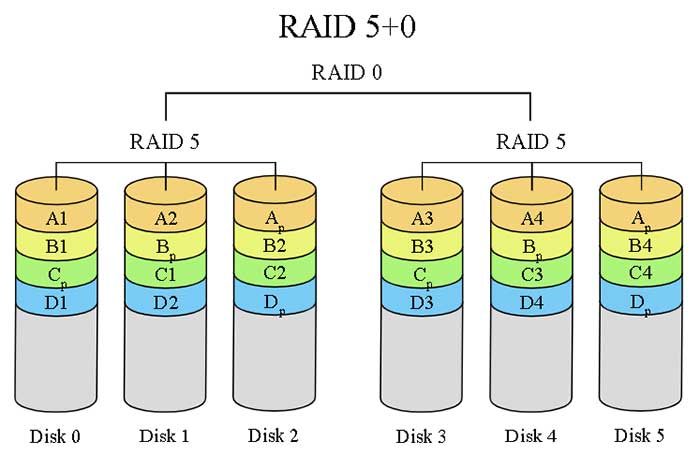 RAID 50 is the conjunction of RAID 5 and RAID 0. It uses the disk striping ability of the RAID 0 with the distributed parity feature of RAID 5 to ensure that your drives work at optimum conditions. The RAID 0 array is used to ensure a better read and write performance with the storage devices, which is the result of the data striping across multiple disks in the array. The RAID 5 array, on the other hand, is used to enhance fault tolerance and redundancy of data derived from the distributed parity feature inherent in the RAID 5.

The combination of these two RAID arrays (RAID 5 and 0) allows one to benefit from the features of both RAID types, thus boosting the overall performance of the drives. The RAID 5 array requires a minimum of six disks as it spreads data across multiple RAID 5 disks, but RAID 0 requires a minimum of two. 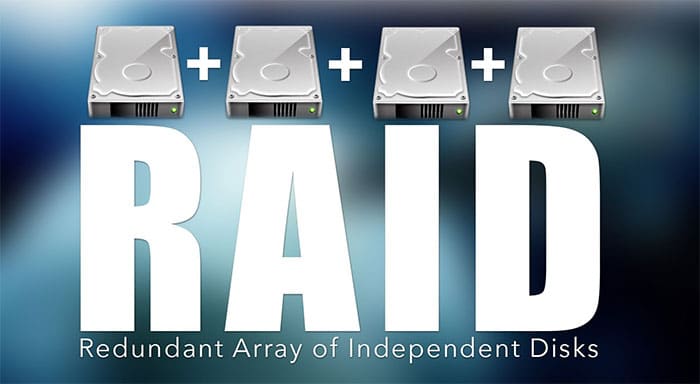 The prominent application of the RAID 50 is boosting read and write capacity of your drives. This is because it allows the combination of the RAID 0 array, which is well-known for its feature as a quality performance RAID. This feature is combined with the distributed parity of the RAID 5 to make the RAID 50 array one of the best performing RAID arrays.

It should be noted that RAID 50 is not the only nested or ordinary RAID level with enhanced read and write performance. Others include RAID 5, RAID 10, RAID 2, RAID 15, and many more. Your preference and that of your organization will determine the most appropriate of these RAID levels to use.

Regarding disk space, RAID 50 uses less disk space compared to other RAID levels, including RAID 5. This can be attributed to the presence of RAID 0 in the RAID 50 array. Its data striping feature allows the allocation of one disk for every array for parity data. Hence, the disk space to be used is minimized.

Disk space can be a major factor when determine which RAID array to use. As much as RAID 10 is also one of the best performing RAIDs, you will find that RAID 50 beats RAID 10 when it comes to disk space. This is because RAID 10 uses mirroring, which cuts its usable disk space by half compared to RAID 50, which uses data striping.

Data corruption is unavoidable but can be prevented, connect with our RAID recovery experts to know more about ways you can protect your drive from failing. 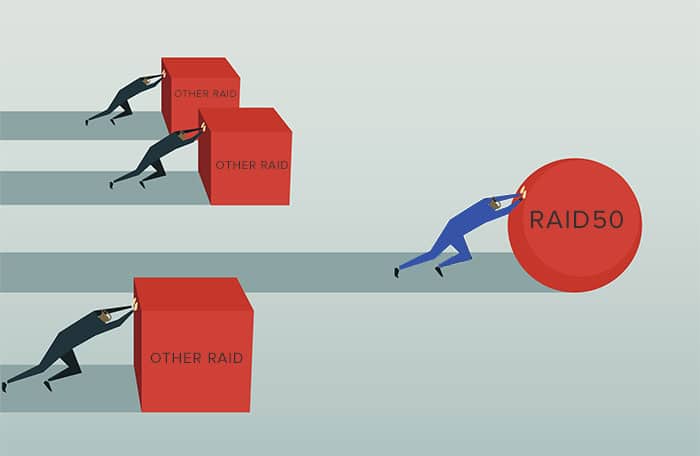 RAID 50’s first notable advantage is the optimization of disk space. While it uses more disks than RAID 5, RAID arrays like RAID 10 uses more than RAID 50.

Another benefit worth mentioning is the improved read and write performance of data that is derived from RAID 50. This is a performance RAID upgrade compared to using a RAID 5 array alone.

RAID 50 also provides data protection in case of failed drives. This is better than RAID 5, which only protects its data against one disk failure, making the RAID 50 a better choice over RAID 5. 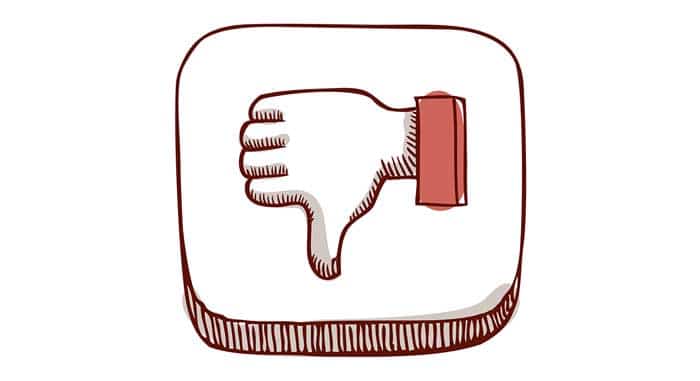 RAID 50 can be said to be expensive, as it cost a lot with its minimum requirement of six drives. It needs more disks than the RAID 5 array.

Another disadvantage worth mentioning is its need for a sophisticated hardware in form of a RAID controller. This requirement, which is also noticed in RAID 5, calls for the synchronization of disks. This, in turn, limits the number of disks that can be used because not all disks can be synchronized.

The last disadvantage that will be mentioned for the RAID 50 is the loss of drives. This answers the question, “How many drives can you lose in a RAID 50?”. The simple answer to this question is that you may lose one drive in every sub-array.

However, it should be noted that this drive loss may be accompanied by data loss. Once this happened, call a data recovery expert immediately to save you from a lot of headache.